Domestic mites – are all mites found in the indoor environment that are capable of causing human sensitization. Sensitization means that the immune system is alert to the mite’s presence and its allergens. Once sensitized, repeated exposure to the mite can lead to allergy and allergic disease in some people, usually those with allergies in their families. Mites, associated with allergy are classified in two distinctive groups. They are recognised by where they live, and what they eat. 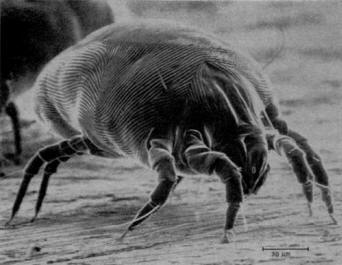 House dust mites – This group is the most well studied as the allergens from these mites are strongly associated with allergic disease worldwide. The most notorious are from the family Pyroglyphidae. They are, ‘Dermatophagoides pteronyssinus’, ‘Dermatophagoides farinae’ and ‘Euroglyphus maynei’ and can be found living in abundance indoors in warm, damp environments. 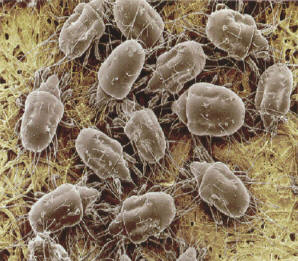 Storage mites – Can be found living in and on poorly stored food and grains. They can be present in kitchen floor dust, cupboards, and pantries and cause allergy and occupational respiratory disease in those who handle grains such as farm workers and bakers. Although there are over approximately 150 species in this group only about 20 can be considered important in economic and health terms. The most well studied of these mites are ‘Blomia tropicalis’, because of its abundance in tropical and subtropical regions and ‘Lepidoglyphus destructor’, which is commonly found in barns.

Many allergens from storage mites have been described as pan-allergens, allergens that may cross species. Active enzymes, from the droppings of storage mites, attack the outer shell of grains resulting in mould growth. This makes the grain easier for the mite to eat.